There’s been a lot of talk lately about “ancestral trauma,” which is the notion that the effects of traumatic events are passed down from generation to generation. It’s the idea that you can be negatively affected by the choices and experiences of your parents, grandparents, and even your great grandparents and further back. While this may sound like it makes sense on the surface, there are a few problems with the way this narrative is presented. In this post, I’ll explain why the ancestral trauma narrative may be causing more harm than good, what the science really shows regarding the intergenerational transmission of trauma, and what this means for you if you or your ancestors are survivors of adverse childhood experiences (ACEs).

How do traumatic experiences affect health and life?

We know from the Adverse Childhood Experiences study (also known as the ACE study), which was conducted by Kaiser Permanente and the CDC, that traumatic events during childhood, including household dysfunction (parental divorce or separation, incarceration, substance abuse, mental illness in the home, or domestic violence), abuse (physical, sexual, or emotional), and neglect (physical or emotional) can have negative effects on health. In this study, they gave everyone a score based on how many categories of these stressful events they had experienced before age 18, and they found out that those with higher ACE scores had greater risk for chronic disease. If you don’t know your ACE score, you can take the ACE questionnaire here.

The ACE study and studies based on it revealed that when we experience traumatic events in childhood, these experiences actually lead to changes within our brains and bodies that increase our risk for various chronic conditions, including mental health concerns, autoimmune diseases, hormonal disorders, and metabolic syndrome-related concerns (e.g. diabetes, hypertension, heart disease, etc.). These traumatic events can also affect our personalities, our relationships, and our underlying thoughts and beliefs about ourselves, the people we interact closely with, and the world in general.

Is “ancestral trauma” really a thing?

Ancestral trauma or the intergenerational transmission of trauma—which again is this notion that the health effects and other effects of traumatic experiences are passed on from generation to generation—is absolutely valid, but there is a major problem with the way this concept is explained, and this is what makes the idea so harmful.

Here’s what I mean: I was spending some time recently in a Facebook group when I came across a heated debate. In this post, hundreds of people were going back and forth arguing about the validity of the original poster’s claim. Essentially, the original poster had recently learned about ancestral trauma and, as you can imagine, she felt incredibly validated by this concept.

In case you haven’t yet had the chance to experience it, you should know that coming to the realization that you’re not fully at fault for many of the things that have happened in your childhood and the effects these things have had on your life (especially in a society that emphasizes personal responsibility so heavily) can be incredibly freeing. I know from personal experience that coming to this realization can help people to be more patient with themselves and to extend more grace to themselves. And this is exactly where the original poster was. She had heard about the concept, and she took to social media to share what she had learned.

Unfortunately, however, the people in the Facebook group didn’t take too kindly to what she was sharing, and I’ll tell you exactly why. Her post went something like this: “…Ancestral trauma explains so much about who we are. Our ancestors’ traumatic experiences are passed down through our DNA, and this shapes our personalities, our relationships, and our risk for disease.”

Now, why would such a docile post stir up so much commotion? It’s because of those three letters: DNA. The original poster’s interpretation of the ancestral trauma narrative was controversial because she was claiming that these effects are passed down genetically. People didn’t like that because many of them had put forth concerted efforts to escape the effects of their own ancestral trauma. Even though their parents were alcoholics, they had never abused any harmful substances, so they couldn’t get behind the idea that these effects were permanently etched in their DNA. This idea was incredibly disempowering, and they couldn’t support an idea that made them a permanent victim to anyone else’s experiences.

Why is the ancestral trauma narrative harmful?

The narrative that the effects of trauma is passed down genetically—through our DNA—from generation to generation is harmful and damaging because it takes control out of the hands of the individual and puts it in fate, luck, or chance. I side with the people on this one, and fortunately, so does the actual science. Science does NOT support the idea that the effects of trauma are passed down genetically.

Are the effects of trauma passed down genetically or epigenetically? And why does it matter?

What’s the difference? For something to be passed down genetically, it would need to be written in the actual DNA. If you remember high school biology, this would mean it’s written in those base pairs, adenine, thymine, guanine, and cytosine. You can think of our genetics as a wooden table. No amount of effort will change the table from wood to stone. No matter how hard we try, we can’t change the makeup of our genes. It’ll always be the same.

If something is passed down epigenetically, however, it isn’t written in the base pair themselves, Instead, it would actually be documented via methylation and other less permanent etchings on our genes. The term epi- means upon. You can think of epigenetics as an overlay, or a decorative piece. If we’re going back to the table analogy, I’d even say think of it as a tablecloth that we lay upon the table. It’s an integral piece of our dinner setup, but with some effort, we can always switch the tablecloth out for another one.

And that’s exactly it. Research on the children of Holocaust survivors has shown that the effects of our ancestors’ traumatic experiences are etched in our epigenome, but because epigenetics are actually a combination of genetics and environment, by changing our internal (e.g. by changing our diets and thought patterns, through nutritional supplementation, etc.) and external environments (e.g. by having ample social support, engaging in physical activity, etc.), research demonstrates that we can actually change our epigenetics and “undo” or counteract the negative physical and mental health effects that our ancestors’ (and even our own) traumatic experiences have had on our lives.

The effects of your ancestors’ traumatic experiences are passed down to you epigenetically, but the fact remains that you have the power to choose whether you’ll succumb to those predispositions. Yes, their experiences may have conferred an increased risk for mental health concerns, autoimmune disease, hormonal disorders, and even metabolic syndrome upon you, but that doesn’t in any way mean that you HAVE to experience these diagnoses or, if you’ve already been diagnosed, it doesn’t mean that these diagnoses have to limit your life.

If you want to take the first step toward decreasing your risk for or addressing these ACE-related chronic concerns and join a community of women like us who are committed to living their healthiest and most fulfilling lives now, in spite of our past experiences, click here to learn more about my ACE Defying™ Wellness Program. 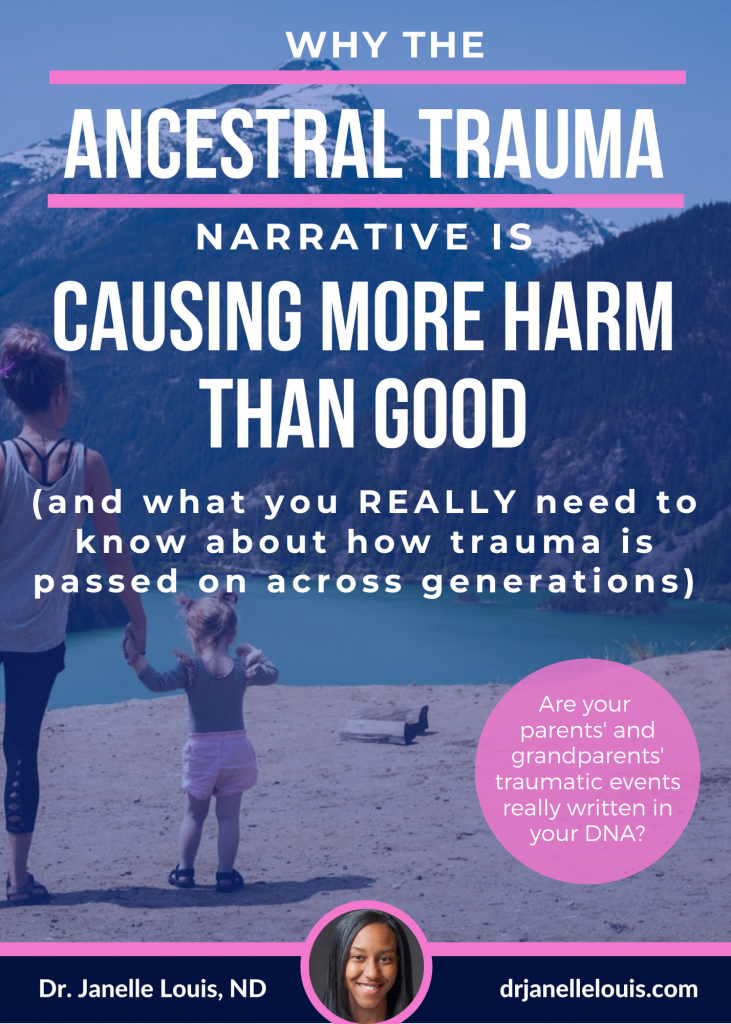 HOW I WORK WITH INDIVIDUALS

I work with people through my private practice, Focus Integrative Healthcare, and through my online group programs.

The information on this website is for general informational purposes only and is not intended to be used as personal medical advice or counseling. Using this site does not establish a doctor-patient relationship between you and any healthcare professionals or other individuals associated with this site. In order to receive the best care possible, please consult with your healthcare provider for proper diagnosis and prior to making any dietary, lifestyle, or other changes. Dr. Louis is licensed as a naturopathic doctor in the state of Vermont; outside of Vermont, however, she functions solely as a consultant. Nothing posted on this site or available through any services offered by Dr. Janelle Louis, ND; ACE Defyers, LLC; or Focus Integrative Healthcare, LLC, is intended to be (and therefore should not be taken as) the practice of medicine. Information and statements regarding dietary supplements have not been evaluated by the Food and Drug Administration and are not intended to diagnose, treat, cure, or prevent any disease. Please see full Legal Information here.